Why All-on-4 is better than the complete lower denture? 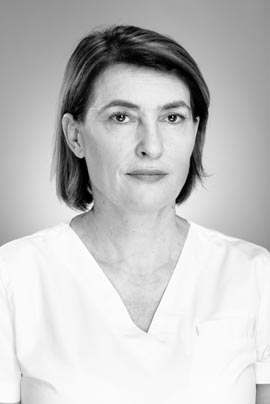 After the extraction of all teeth, it is necessary to replace the lost teeth, but also part of the ridge. The patient is faced with the situation in which he cannot eat and speak, while his physiognomy changes. Thus, a good prosthetic replacement must solve all three problems. Function, phonation and aesthetics.

Complete lower denture, as one of the options, is a prosthetic replacement that relies on hard structures, ie the ridge. As this is an already narrow area for the bearing, we extend parts of the prosthesis to certain soft areas in order to make the prosthesis more stable. However, the prosthesis is exposed on the inside to the constant action of the tongue, a large and active muscular organ, and on the outside to the cheeks and lips. If the edges of the prosthesis are well balanced and the ridge is pronounced, the prosthesis should be vacuum sealed. Ideally, this is the case, but very often the resorption of the ridge is so pronounced that the prosthesis does not actually have a bone bearing, and the surrounding soft structures tend to move and expel it from the mouth.
It is not difficult to imagine the problems the patient faces at the time of placing the prosthesis in the mouth. Resorption of the ridge usually means missing bones even for dental implant placement in the molar area to possibly have a fixed work. Yet there is an option for a fixed prosthetic replacement that circumvents both problems.

All-on-4, ie all teeth on four implants, is a prosthetic replacement that very elegantly liberates the patient from wearing a complete lower denture:

– and implants that ensure fixed operation are located in the front part of the lower jaw where there is usually always enough bone to place them. The central implants are placed vertically, and the lateral ones are at an angle that avoids the large nerve that passes through the canal in the lower jaw.

The resorbed ridge is replaced exactly in the area where it is missing without spreading to the surrounding structures, and the teeth are zirconium, ie one of the most aesthetically pleasing materials.